Blue Zones are the regions where people are known to live much longer than average. This term was introduced in the year 2005 by the author Dan Buettner. It is known that genetics only play a 20–30% role in longevity. So, what are the other factors that make some areas blue zones? Currently, there are five regions in the world that can be referred to as blue zones, namely:

Icaria is an island in Greece. People residing here eat a Mediterranean diet that is rich in olive oil, red wine, and homegrown vegetables.

The Ogliastra region of Sardinia in Italy houses some of the oldest men in the world. They live in mountainous regions where they typically work on farms and drink lots of red wine.

Okinawa is home to the world’s oldest women. People here eat a lot of soy-based foods and practice tai chi, a meditative form of exercise.

The Nicoyan diet is based around beans and corn tortillas. The people of this area have physical jobs and have a sense of life purpose known as “plan de vida.”

The Seventh-day Adventists are a very religious group of people. They are strictly vegetarians and live in tight-knit communities.

People in these areas have the highest number of centenarians (who have lived longer than 100 years). Other than this, residents here suffer just a fraction of the diseases that commonly kill people in other parts of the developed world. They enjoy more years of better health and lifestyle as compared to others. The fact that amazes many is that there are facts and explanations behind the longer and healthier lives led by the people here.

Compared to Other Regions 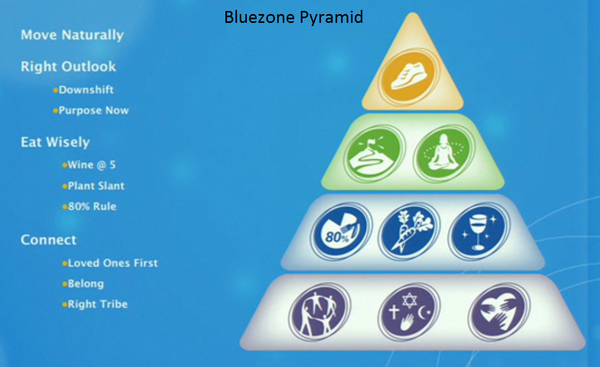 How to Live Healthier and Longer?

Studies revealed that along with stress-free life, the population levels in blue zones is quite low. People residing here believe in healthy diet, daily exercise, sound sleep, and hygiene. One does not necessarily require to practise rigorous exercising. Not leading a sedentary lifestyle and usual activities are enough to keep an individual in good shape. If take a closer look at all the five blue zones, we will get to know that the people residing here have a few common traits. They live in isolated parts of the city. They prioritize their family over anything else. People here do not smoke, consume alcohol or animal-based foods on a regular basis. They are socially and physically active. They get a sound sleep and day time naps are quite common in blue zones.

However, all the other practices can be inculcated in one’s daily routine, getting proper sleep is quite difficult for a few. They do have their own forms of meditation and yoga which might help others as well.

This is basically everything that we are aware of and we can do as well. So, perhaps, everyone can lead a healthier and longer life if they follow such a lifestyle. After all, life is a gift that we should take care of. But there are a few factors that make blue zones different from other regions.

Why are Blue Zones Special? Blue zones are the regions where native flora grows under special conditions. It can also effectively counteract the aging process. Thus, the secondary plant substances from such areas are undergoing research to find out if they could have a use in anti-aging, neuro-degenerative diseases and geriatric diseases.

We tend to get anxious and worried while living in urban areas. Other than this, the pollution and the chemicals in our daily food messes up our system a lot. Moreover, the stress of getting ahead, achieving something and being a part of the rat race is constant which takes away our peace. So, if we are able to let go all the materialistic stuff and let ourselves the true gift of life in its utter beauty, we might be able to live a much healthier and longer life. Then, no matter where we stay, any corner of this world would then be a blue zone.