Raksha Bandhan: A Promise to Protect

At last, after a long and tiring phase of this pandemic, there is finally an aroma of love and affection spread all across. While we are entering the other half of 2020, Indians are looking forward to the festivities coming their way. Here comes the most awaited festival of love – Raksha Bandhan. The festival that celebrates the bond shared between a brother and a sister. Probably India is the only country that celebrates this relationship in such an auspicious manner. And why not, it is one of the most special bonds of all. The one that brings so many flavours in our lives. While they may pull each other’s legs all the time, they also love each other dearly.

Every Day is Special But more than this, it is a festival that fills you up with emotions. As a brother, you would sense great responsibility towards your precious little sister. While this day offers you with an opportunity to show affection, we should know that love requires no special day. And as siblings, you can express your feelings to each other at given day. But there is definitely something extremely special about Raksha Bandhan that you cannot overlook. The beauty of this festival is not only that it is celebrates the love and commitment between a sister and a brother but it also embraces a myriad of emotions.

Celebrating All Kinds of Bonds

Now, if you would take a stroll down the memory lane and try to recollect some moments of the past years and the way Raksha Bandhan was celebrated, you will find yourself reminiscing some amazing moments. There were times when we witnessed a driver tying up a strand of cloth to his vehicle, a mechanic to his tools, a musician to his instruments, and devotees to God. Different people tie Rakhi to different people and elements. Anything that means a lot to them and things that they admire a lot. This is because just a single strand of fabric, if tied with the same love, belief and devotion can turn into a sacred Rakhi. After all, we live in a country that is known to worship cows, trees, and even stones. Well, this is all because their beliefs and dedication.

Another very common practice that we observe is that brothers tend to keep this thread of love on their wrist for the maximum number of days possible. Most of them believe that untying a Rakhi would not be a good omen. They don’t want to let this symbol of affection go out of their sight. Well, that is how auspicious this festival and its elements are. 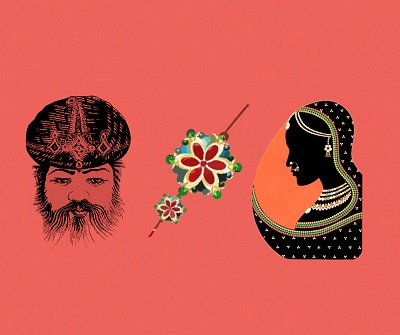 There are many stories behind this festival of love that tell us about how it started? But the authenticity of all these tales is not yet established. But there is one of Queen Karnawati. She ruled over Mewar on behalf of her eldest son – Vikramjeet after the death of her husband Rana Sanga.

The story revolves around the time when Bahadur Shah of Gujarat attacked Mewar for the second time. He had already defeated Vikramjeet before so the queen began to seek the help and support from other kingdoms. She sent a Rakhi to a Mughal emperor – Humayun. She called him her brother and asked for his help.

Interestingly, Humayun’s father – Babur had defeated Rana Sanga when he directed a merger of Rajput armies against him in 1527. When the Mughal emperor received the call for help, he was in the middle of another military campaign. But to this request, he turned his attention to Mewar.

Unfortunately, he could not arrive on time. The Rajput army was already defeated at Chittoor and the queen had set herself on fire to avoid getting into the hands of Bahadur Shah. But due to Mughal’s military reinforcements Shah could not go further and had to get away from Chittoor. Humayun then restored the kingdom to Karnavati’s son, Vikramjit ensuring that he protects her sister’s kingdom and keeps his promise as a brother. Ever since her name and this story is irrevocably linked to the festival of Raksha Bandhan.

There is a lot that just a single piece of thread can do. And owing to such stories, people have so much faith and celebrate this day with so much zeal and excitement. And if you are planning to enjoy the festivities of this day with your siblings, be sure you make the most of it and get each other some amazing presents. Happy Raksha Bandhan!